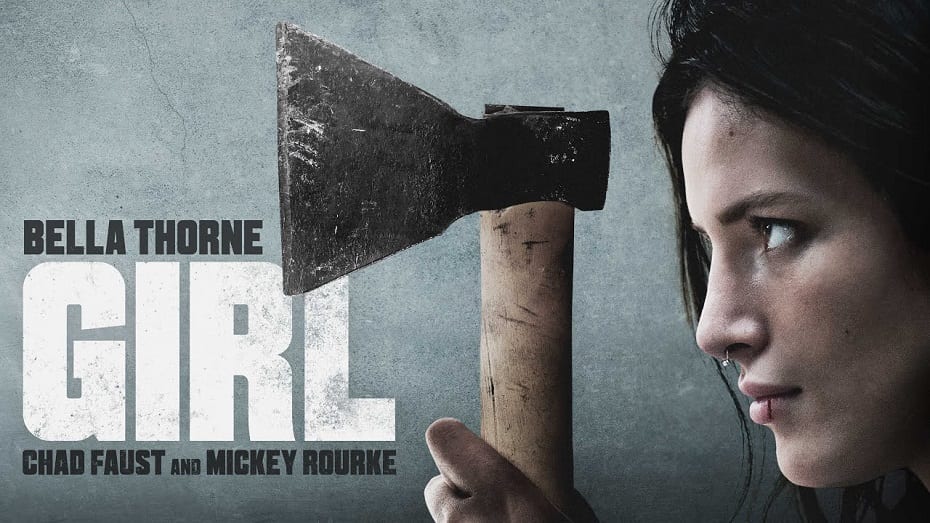 There is nothing inherently wrong with this small production movie, Girl. It did however leave me wanting. A film I watched because I was having a conversation about whether every film Bella Thorne stars in has her doing something sexy. Not that there’s anything wrong with that of course, but this seems to be her movie stamp so to speak, no matter the role. Here she does manage to hang out in a laundromat while washing blood out of her clothes. There is side boob. She also says daddy a lot. The sexy stamp is confirmed here.

In this wanna be darker than it is, thriller movie written and directed by Chad Faust, Thorne stars as a girl who is out for revenge. Her mother tells her she received a letter that simply put, says he coming for her. Already injured from an incident years before, at the hands of her father, Girl heads off to intercept further abuse. She wants to stop the games and get rid of this horrible man once and for all.

The twist is introduced early on, with Girl arriving in the small town and running into the town Sherrif (played by Mickey Rourke.) His behavior is out of the ordinary and slightly suspect as he bullies her while walking alone. But Girl is a woman on a mission, and she throws some surly one-liners and continues on her way. She heads to a small bar for directions which results in her being steered towards a telephone book. A fight breaks out and she holds her own albeit being thrown to the ground by a toppled aggressor. She got her address though and continues on her way.

The narrative is simplistic if not extremely corny and predictable. Nonetheless, the meager characters are interesting just enough to want to see the story out. It’s an interesting take on a film about a girl with daddy issues seeking reprisal for a life she missed out on. Because of her fathers’ neglect, Girl needs answers. She wants to finally stand up for her mother who has had to live with a broken back since he kicked her on the ground when she was small. She gets to his ramshackle house early on but finds him dead in his shed. Girl, is understandably upset, she wanted to be the one to kill him. Now her plan has changed and she needs to find out who took the privilege away from her.

Thorne utters the word “daddy” like a lost little girl every time he is in conversation which I think is the point. She talks to strangers in the bar while she waits for the return of the sheriff. To find her father’s killer she will need to alert the cops. Clues about the town and its population are slowly added to her equation. Rather than being a tight and orderly set of scenes, the inexperience of Faust makes it feel slightly offbeat. Some of the dialogue is contrived and awkward. Performances are more made for TV-movie than high-end cinema but I like that about it. Girl, has a certain charm that I can’t quite put my finger on even though I feel like I hated it.

Watch it for a fight scene featuring a throwing axe that isn’t too bad. And of course, the side boob if you like that sort of thing.

2 fluffy dressing gowns out of 5