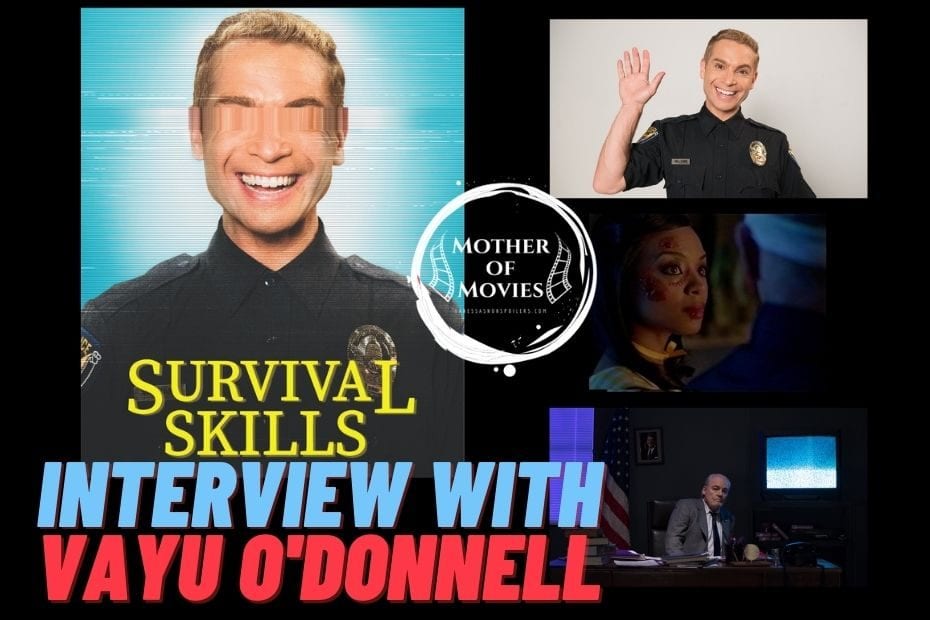 Survival Skills is one of those films that as a cinephile you don’t see coming. A small production, a directorial debut for its creator Quinn Armstrong and a film that won’t claim to be something that everyone sees or even hears about. But for Mother of Movies, it’s often in the obscure and lesser-known movies that I find the most value. Survival Skills is my favorite movie for 2020. I loved it. I loved it so much I awarded it 5 out of 5 stars. This article marks its release and I got to ask its star Vayu O’Donnell some questions.

Survival Skills is distributed by Cranked Up Films. It’s available on-demand from December 4th, 2020 and I recommend forking out whatever the cost is to see it. Rent it on Amazon.

A Little About Survival Skills the Movie

Mother of Movies doesn’t do a lot of interviews, but I could simply not pass up the opportunity to ask some questions to Vayu O’Donnell. O’Donnell plays Jim, the star of the film and a character you will fall in love with when you see the movie. Set as an 80’s police training video, Jim is fresh on the force. He’s the nice guy you root for. The guy you want to win. But what happens when the good guy meets reality. The world and the systems it lives in are not made for good intentions. Stacey Keach narrates this beautifully dark sarcastic comedy and drama movie that is a must-see for anyone who loves a character-driven film they will remember for the rest of the year.

Vayu O’Donnell is an Actor, Writer, Editor & Producer. He Stars as Jim

Well, I guess that depends on what you want to qualify as “important”. I remember landing the role of Gaveston in “Edward the Second”, a Christopher Marlow play that was slated to open the new Harmon Center for the Arts with The Shakespeare Theater Company in D.C. That was a big deal for me. The role was challenging, they were looking for a star, but having trouble finding someone, and three auditions later, I got it. Stewart Howard was a casting director in New York that went to bat for me. I was pretty fresh out of NYU Grad Acting with very few credits.

The other important gig was my first Broadway gig, understudying Adam Driver in the Terrance Rattigan play, “Man and Boy”. Going into the audition I knew that if I were to land the job, I would definitely go on for Adam for at least three performances, playing opposite some real greats like Zach Grenier and Frank Langella. It was performing in that piece that I had the realization that I could carry a lead in a Broadway show. It gave me a lot of confidence. And that job I got through being a reader for the wonderful director, Maria Aitken. I think I always wanted to act. I remember being a 6 or 7 and looking at kids in commercials thinking, “I could do that.” But I never followed up on it…granted, living in Northern CA with a single mom, it didn’t seem like a reality.

The acting career is not an easy path. There is a tremendous sacrifice and little to no guarantees of any success/stability. I find it challenging to this day. But nothing quite ignites me like acting…the collaboration toward a common goal for the purpose of spreading empathy. What initially attracted me to acting was most likely the escapist quality of leaving my own circumstances for a brief moment while on stage. What has kept me in pursuit of this career is a love of the people I meet, the challenge to stretch my own experience as a person, and the challenge.

That’s a tough one. They all have their merits. I’m passionate about lifting others up. Whether it be by editing a piece that really accentuates the performers, or development producing to help a project that I am a fan of come to fruition. Acting and writing for me are much more personal. They are about sharing myself. Writing is a chance for me to put into words my own experiences cloaked in the disguises of others in order to share, and by sharing hopefully connect to an audience who can relate.

Writing often makes me very emotional, as I try to get into the skin of my characters. It’s incredibly vulnerable. Acting requires me to take up space. It invigorates me. It also scares me. If I don’t believe what I’m saying I’m done for, no one will believe it. And it takes a lot of work for me to get to that place.

Yes, I have multiple projects, “secreted away”…more accurately, multiple projects that need some rewriting. Most of my work revolves around issues of authenticity and identity. I’ve been writing primarily hour-long dramedy pilots, and one pretty intense hour-long drama pilot that looks at the intersection of gender, politics, and societal norms. I’m curious about what society expects of us and how that affects what we expect of ourselves…even causing us to belie ourselves. I also have a half-hour I’m just breaking ground on that is a bit of a comic mystery caper on the surface, but really, it’s a character-driven piece at heart…also dealing with gender, identity, and authenticity. The idea of the hero.

It’s funny you say that. Most of my stage roles have been dramatic, with a few exceptions. I think I have a pretty elastic face so on film it lends well to comedy. Comedy is much harder for sure (for me), I have vulnerability as the day is long. My favorite is grounded comedy that guts you on the turn of a dime. Something like the second season of PEN15. Just glorious.

I love movies, but with a two-year-old running my life and my own writing I have very little time to watch them. I do watch streamers. I loved Scott Frank’s “Godless”. I also love PEN15. I usually go for a darker hour-long drama like “Ray Donovan”. I think “The Boys” is a great take on the Superhero genre, and I’m a fan of Sci-Fi as well…”The Expanse” is really well done.

The most challenging part of Jim was really the affect. Where was this guy from, what was his back story, etc. The director and I went back and forth for months trying to identify what it was that allowed Jim to act outside the bounds of normal society. We did heavy research into neurological conditions like Aspbergers and Autism…but kept coming up against the obstacle of dealing with Jim’s past…which put the focus of the film on Jim and why he was the way he was, instead of watching him change over time. We finally agreed that the character was created for the purpose of the film, allowing us to operate from a place where Jim had no past and thus his experience was truly one of innocence to experience…which is the emotional hook for the film.

I’d be curious to hear where you though his tipping point was. His whole experience from the time he meets the Jennings is an erosion of idealism. It’s a painful journey for him. He tries will all he can to play by the rules and keep up his vision of how the world and the law is supposed to work, but he is let down…time and time again. There’s one major moment for me in the film, after the interview of Lauren, when Jim loses his grasp. He can’t fathom what he’s heard and what might motivate it. He’s in a free fall. That was a tough day. I was pretty emotionally spent.

Absolutely, that interview with Lauren (Madeline Anderson) who is amazing by the way, was so understated yet so pivotal. He rises up from this somehow. For the record, Mother of Movies thinks Jim’s tipping point is the scene where he comes down the stairs after going to the shelter. For the first time, Jim doesn’t believe what he’s saying. This, for me, is where the downward volition begins. By the time he has the conversation with his wife, he was already lost and she knew it too. By the time he has a conversation with his chief, he can’t even deal.

Most of the time I wasn’t on set I was learning lines, or trying to go for a run to get in my body/breath. However, I was on set nearly every day, so I didn’t get much time off. I did manage to see a few friends in Seattle and even go out for a solo meal to treat myself.

Not that I know of, you may have to ask them. We had a really great crew and cast. I did try to crack a joke with Stacy that fell pretty flat…so that was awkward.

I honestly haven’t been tracking the reviews since the VOD release. But I’m really happy that the film seems to be getting some traction. I would love this to become a little darling that just keeps going and going and maybe gets a wide audience.

Well, nothing as of now. Covid has done a number on everyone, but hopefully, with this film coming out and garnering some good attention, and productions starting back up, the phone will start ringing again. Regardless I appreciate you and your interest. Thanks for helping to get the word out!

Keep an eye on the Facebook Page of Mother of Movies becuase we will be moving into live interviews for 2021.