Who Had Toxic Alien Zombie Babes For November 2020? 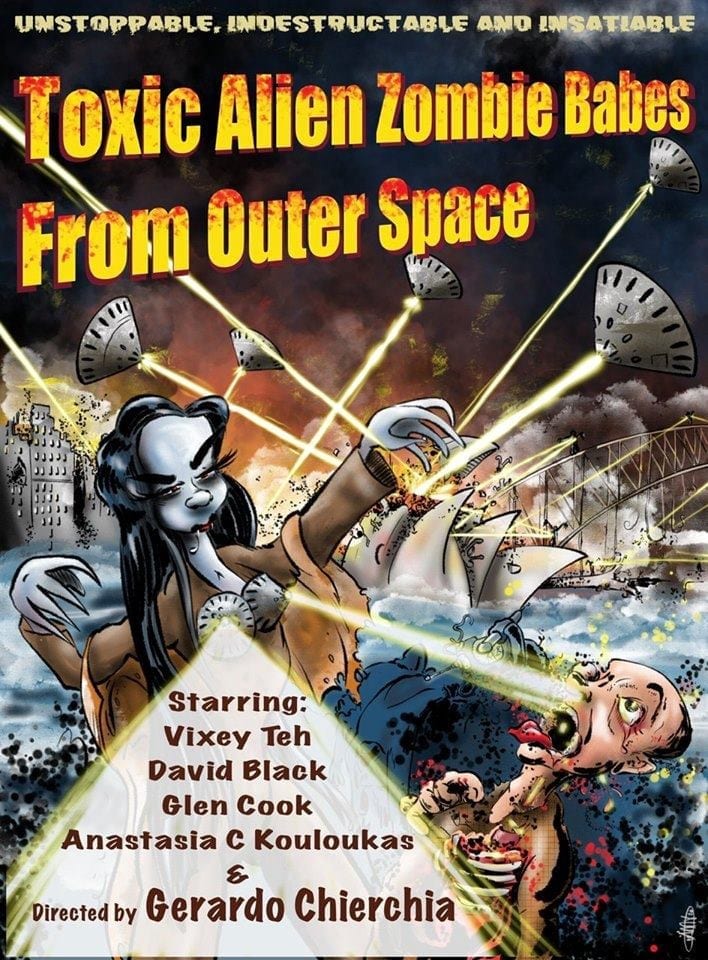 Who Had Toxic Alien Zombie Babes For November 2020?

David Black is busy making Toxic Alien Babes from Outer Space and Mother of Movies needs to tell you all about it. If you’re a regular reader of the website, you will have heard me mention this Australian filmmaker a few times already. Klink Klonk Klunk was a narrative short film he put together during the Covid-19 lockdown. There are titles such as Sinister Symbiosis, Dramatic Diablos, and Cannibal Barbeque, all short film horror schlock that will have your jaw drop to the floor. Black stars and produces and directs much of projects. Lockdown in his home town, Melbourne, Australia has sent most people to wonder if there are enough streets in their neighborhood, but Black is just churning out ideas and films.

In Addition, Toxic Alien Zombie Babes From Outer Space is his next project and it’s easy to see there is just as much enthusiasm for the industry now as there ever was. Of his newest film, David Black working with Gerardo Chierchia said,

“There have been a few features made during lockdown but most have been full of zoom footage and self-shot talking heads on the iPhone. This one is different and blows people away.”

Firstly, if you wanted a glimpse into the vision of most people’s nightmares, murder hornets, UFO warfare and zombies on the loose will give you that much-needed dose of an unreality check — most people sorely need.

Toxic Alien Babes features filming from crews all across the globe. The current state of global travel restrictions means that this time, no one needs to go anywhere. Of course, the collaborative process of the overall finished product is all being done remotely. Parts have already been received from Spain, France, Canada, the USA, and of course here in Australia. Everything is coming together and the results are looking pretty good.

I’m sure you’re asking… I wish there was a trailer! Well, you’re in luck. I have the introductory opener for you to feast your eyes on. Check it out right now.

Earth is rife with man-meat and these zombie babes come from a planet where the females have libidos with far-reaching capabilities and strength.

What’s more, keep an eye on the Facebook Page for more details on the release. Just hit the button below to launch the spaceship.