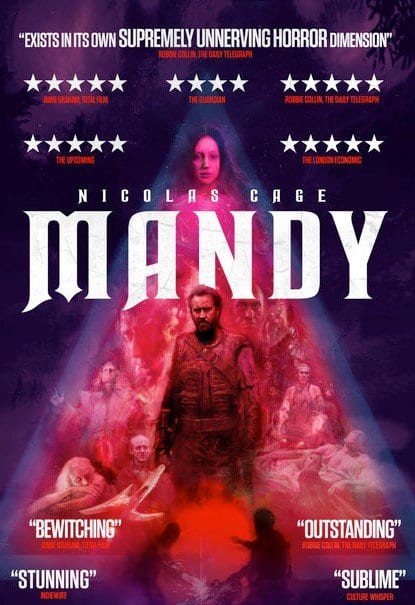 Mandy is set in the deep dark forests of 1983. Red Miller, is not a happy man, he’s haunted and broken (Nicolas Cage.) His one true love is killed by a group of terrible people and it’s now his duty to avenge her death.

Mandy comes from the critically acclaimed director Panos Cosmatos. And for those that love Arthouse and cosmic movies alongside guttural synthesizer scores, Mandy’s a style over of substance fans’ dream. For the rest of us, left scratching our heads and unable to connect with the visual slaughter of one’s eyes, it will not be as much of a fun ride.

This review contains spoilers and some plot-explanation.

Movies have long been promoted with a masterful touch of magic. Fans of specific genres get baited into thinking a film will contain certain things. Through trailers, posters, and merchandising promotion and distribution teams run with an angle that isn’t entirely accurate sometimes. At the beginning of the year, I stopped watching trailers.

Not because they entice people to see the film a certain way, but often the promotional segment used to advertise a film contains key plot points. 2018, there seemed to be a spate of movies that were ‘the scariest,’ and ‘banned from youtube‘ or made people run screaming from cinemas and Veronica and The Nun come to mind with those sorts of tactics and while I didn’t fall for the gimmick, many did and were left extremely disappointed.

I Just Love Nicolas Cage, And You Will See Him Rage Here

Above all, Event Cinemas Chermside, organizers had gone the extra mile. They had set up scare actors within the darkened corridor to the seating area. Horror-themed music and red lighting filled the room and a masked Leatherface man wielding a chainsaw ran at me as I walked in. Pinned flush to the wall was a zombie in chains screaming “run!!” as punters rushed by. What a treat! The audience was buzzing and I was ready for some action. But, before you do anything, buy this Nicolas Cage T-Shirt from Amazon.

What Happened Then? Was There a Black Rainbow?

Then the movie began.

This flashed up on the screen and some guys with long hair in front of me nodded their heads in agreeance.

Lay two speakers at my feet.

And rock and roll me When I’m dead.”

The synth started up and everything went very quiet. Red and Mandy, the perfectly matched pair left to drown in dark color palettes and quiet drawling dialogue. Their sentences involve ramblings about which planet they would be and how Mandy’s father made her and her siblings kill some baby birds one time.

Mandy’s an Artist who reads lots and lots of fantasy novels and has a scar running down one side of her face. The novels she reads are utilized in voice-overs during dream sequences featuring dead baby deer and spiraling manga-esque cartoons. Lumps of time tick by normalizing these two rather odd characters but I guess it’s successful if that’s the intention.

Beyond the Black Rainbow

In the background, the cult is building its story as well. The ensemble is the generic type of rock-star led, brain-washed types with connections in the demon world. It’s here I need to point out that the performances from every single cast member are on point. As far as directional nuance goes Panos creates the perfect symbolism for every single character within the piece. Jeremiah is the epitome of cult leaders everywhere.

Outsourced villains ride quad bikes and are twisted and maniacal. The Hellraiser Cenobites have been afforded some artistic flair by way of a knife phallus, and some powder-snorting, as well as pointy leather armor. But the thing with surmising a movie of this type is, is that it all sounds perfectly delicious when you explain what it’s about. What you don’t hear about is something that I will explain by how the rest of the audience I was seated with responded to this movie.

Firstly, of the details, I’ve mentioned taking place over the course of about an hour. Mandy’s set alight in a scene straight out of Friday, the 13th (2009) and Cage begins building the rage we’ve all been told about. Prior to this, not a lot happens. I chatted with people in horror groups who’d seen the film via streaming services at home. Red’s distraught and grief-fuelled collapse in the bathroom brought some to tears. As I sat in the cinema, and this scene came to its crescendo, I felt quite enamored with Cage’s performance. He just does loopy, so, so well.

Not to mention, the audience showed a different side. To clarify, I heard a snicker break loose as Red let out an almighty scream in his tiger shirt and tighty-whiteys. It became contagious and infected almost half the people in front of the screen. I guess everyone had built up such anticipation to the onslaught they were about to receive that they took the first opportunity to exhale because something actually happened. By the time Cage’s final scenes rolled around and he totally loses the plot under a dollop of acid, the moviegoers laughed out loud. When the credits rolled, a small spattering of people clapped and someone yelled out “yay, it’s over” to the response of giggles. Another commented, “and that’s the point.”

What’s more, I mingled in amongst some people as they left, and some were completely silent. Others were using their hands in a gesture interpreted as ‘mind = blown.’ I overheard some smokers outside say “it’s a slow burn, that’s for sure.”

People commenting outside the movie theatre

What About Mandy, Does Nicolas Cage Avenge Her or Does He Find a Black Rainbow?

Additionally, I get it. It’s a visual expression of love, grief and loss told through the lens of hippy-filler and pretty colors. Even though Mandy is a five-minute tale fleshed out over a two hour period, the story’s kind of cool. A story about star-crossed lovers who found each other and were ripped apart by evil forces for no reason what-so-ever than one mans selfish desire to have something he wanted. Red’s ability to immerse into the hell he finds himself, satiates his quest for revenge and he only pays with his insanity.

Finally, I am not an Arthouse fan nor a Black Rainbow fan. Thanks for the chainsaw and crossbow sequences though. As a matter of fact, thanks also, for the million horror movie references and symbolism too.