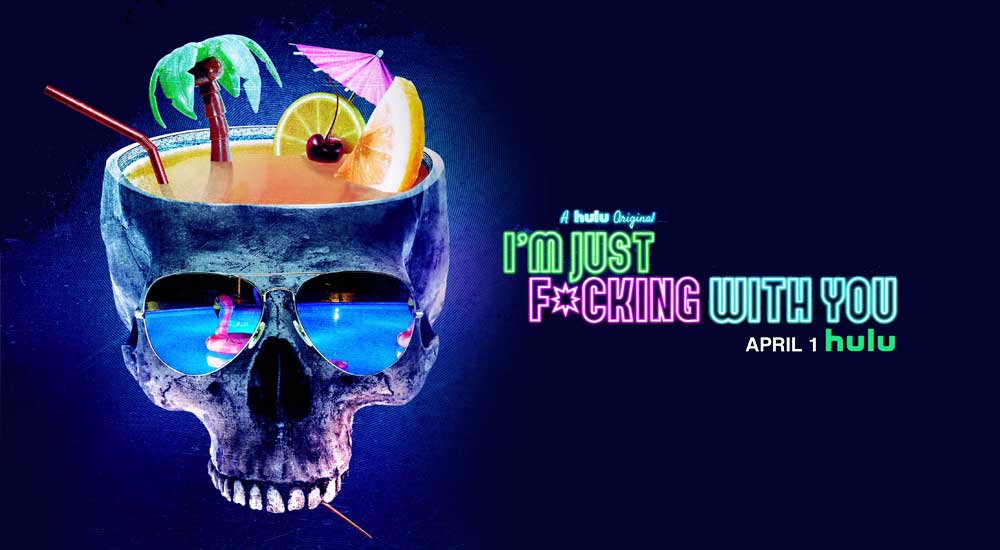 Adam Mason is awesome and I’m really excited I saw his name against episodes for this series (see the end for details.) I’ve been following Mason’s work since I saw a film he made called Hangman (2015.) I’m Just F*cking With You is an April Fools Day themed horror movie for the Into the Dark Series. See how to prank people on April Fools Day, horror style, and with all the style of a neon fanatic.

‘I’m Just F*cking With You’ is themed for April Fools day and it rates pretty high for me. The episode was written by Gregg Zehenter and Scott Barkan who both wrote Edge of Fear (2018.) There’s a lot of trash talk about this anthology series, but I like it and by that I mean, it seems I like it more than most.

But, I’m here to sing it’s praise and if you’ve ever seen films like Like Me (2018) or The Neon Demon (2016), you’ll feel that same vibe bouncing off the walls here. Perhaps not story-wise, but the palette and backdrop. The color is all pastels and neon which I think this makes for a perfectly eerie and obscure setting. Think… flamingoes and blurry hues. It makes everything feel like you’re watching some kind of retro flashback set in a modern era.

The story for episode seven starts with Keir O’Donnell as Larry. He’s driving to a hotel to meet his sister Rachel en route to watching his ex-girlfriend get married. It doesn’t take long to put two and two together and assume he is not happy with that idea. Also apparent is that Larry likes to get his keyboard warrior on under the guise of his online identity; ProgrammingFlaw3489.

Next, we meet Chester Conklin played by Hayes MacArthur who immediately sets about pulling Larry’s chain. A prankster at heart, it’s easy to predict that things are going to escalate at some point here. An episode based on the theme of April Fools day should have some fooling in it, right? Larry is the perfect candidate for some well-earned comeuppance. Anyone who’s seen or been the victim of an online troll will be hard-pressed to muster any sympathy for Larry. Until of course, his sister arrives and serves her best purpose as the one to humanize the poor internet stainer.

The reason I liked this installment varies. Firstly, previous episodes have been a little light on the horror but they’ve all had elements that were really well done. My favorite, of course, was Wilkes from the first episode, The Body. And here, both Larry and Chester have secrets which allow for current IRL (in real life) topics like internet trolls to sidle up against the ingrained horror sub-genre of— killers.

I also liked how the back-stories for each character played out here. Aside from that, to pump a narrative out in 80 minutes that even comes close to being layered in some way is pretty good if you ask me.

Into the Dark’s ‘I’m Just f*cking With You’ even had a kickass score to go with it. There’s nothing better than a formidable build-up of tension with funky music and, a psycho wearing a Hawaiian shirt, now is there? Where’s your sense of humor?

I give I’m Just f*cking With You

4 clean pillowcases out of 5

We are seeing an increasing amount of modernized takes on well-worn ideas (like Pet Sematary 2019 for example.) Previously released shows and movies in recent years. Filmmakers picking up the ax from where others have put it down. I don’t think the world has run out of original ideas. I just think we like stuff and filmmakers try to give us more of what we like!

Hulu Into the Dark Trailer

More Series to Watch: The Boys Season 2 / Into the Dark – School Spirit

Are you snacking while you binge? Don’t use a rubber band to save the rest, try this neon snack clips.