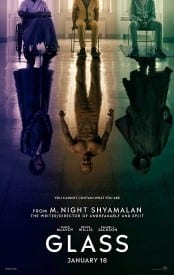 I didn’t watch the Glass movie after Split. In fact, I started with Split. However, I certainly got more out of the films once I did go back and watch Unbreakable. The great thing about this Glass trilogy is they are all great standalone films. If seen in the correct order, I can imagine the experience would be even better. Is the Glass movie scary? Well, that’s in the eyes of the cinephile, but I’ll try and allay your fears.

This series of movies is about superheroes but, there are no capes. There are no exclamations of Shazam! Nor fanciful seahorse calvary and, underwater conversations or even suits with lightning bolts on them. All the people in this universe, most of the time, look like regular people.

Should I Watch Unbreakable Before Glass?

Is Glass the Sequel to Split?

Glass takes up where its predecessor, Split, left off. Three weeks later to be exact. David Dunn is knee-deep in his vigilanteism while also trying his hardest to track down Kevin. David’s become a minor celebrity as he visits wrongdoers and imparts some comeuppance.

Dennis has kidnapped a new group of girls, this time cheerleaders and has them holed up in a large warehouse. He has also discovered celebrity in the form of notoriety and the newspapers refer to him and ‘The Horde.’

Later, Kevin Crumb and David Dunn end up imprisoned after capture by some very quick and effective enforcement officers. They aren’t put in jail but in a high-tech-mental institution under the watchful eyes of Dr. Ellie Staple. She’s created a contraption involving flashing strobe lights to keep the strongest identity down. Meanwhile, Dunn’s cell has high-pressure nozzles that create a drowning effect which in turn stops him from escape.

Mr. Glass seems has suffered brain damage and is no longer a threat, living out his days in a wheelchair.

With a $20 million budget, it’s in this film we meet most of Kevin’s personalities but see less of them individually as they appear too briefly. The lights flash in response to threats forcing new identities to get their turn in the light.

Is Glass a Marvel Movie?

No, these are not Marvel movies. This film series is also known as the Esattrail 177 Trilogy. The three films combined were all written by the same person; Shyamalan. Subsequently, he also wrote, directed and produced them.

Glass is rated M and advised for audiences 14 and over. The film includes horror in subtext but is definitely more a drama with exciting scenes and lots of fighting. I had it in my head, Glass would be boring, and although the scenes seem quiet and narrative filled, I like that about Shyalamana’ style. The Beast could be described as a scary character, however much of the gore is implied and more vigorous violence is played out off-camera.

From start to finish I felt the tension build within the storyline of each character. There is enough information about each to fully satiate those who love a good story.

The flashbacks included here, aren’t overdone. Nobody likes too many long repeated sequences of films they’ve already seen. Here some restraint was used to give you the information you need from the previous films. Just little things, like where Dunn’s fear of water comes from and a great backstory scene for Mr. Glass. One flashback was even used to propel a twist inside the story and was nicely executed.

What I find the most prolific in these films is that while many expect them to be cohesive, I don’t think that was the aim for them. In the same way, Shyamalan added a voiceover at the end to describe this final film is not a sequel but another origin story. It gives it an air of difference when compared to many other films built in the same way. It’s for this reason, throughout my review series, I have maintained Unbreakable, Split and Glass can be watched out of order. They can be because they are individual stories that stand alone as well as are hinged together.

The Glass movie feels like it’s partially Dr. Ellie Staple’s story which just happens to give you more of a baseline for the rest of the main players. It’s through her monologues that we find out the universe is not a closed boxed of just good vs evil. Someone (her group) has been watching the interactions between Dunn, Glass, and Kevin for some time. So much time, in fact, she’s built what she thinks is the perfect cage for each of them.

Ellie professes a long history of dealing with this sort of thing and like any institution has a solution to quash bad behavior. In her ideology of convincing the trio, they are regular people with a medical problem you can see the holes in her story. We already know they are extraordinary so why wouldn’t she. I think she plays with reverse psychology to hide in plain sight and her pretense is that she knows nothing when in fact she knows plenty. But like her extraordinary clientele, she isn’t exactly going to come in guns blazing. Why would she say her solution to their obvious mental issues is to give them all brain surgery. First, she must convince the authoritative bodies just how sick they are before she can make their powers go away.

In each film, Dunn has always been relatively dormant, choosing to ignore the heights of his abilities in exchange for a subdued existence. Living in this way he gets to put out small but dark fires in society. He also gets to keep his son safe. I think Dunn is given just enough screen time, given the way his character is constructed. He lives in the shadows and wants a simple but worthwhile life. Shyamalan’s films always point out the ineptitude of human nature and Dunn is the epitome of this rule. I never felt The Beast and he was an equal match. Had it not been for capture, I’m sure he would have saved the girls and have gone back to the shadows.

My biggest issue with Glass is the facility and its staff. It’s within scenes of a furtive escape that my resolve to adore this film were somewhat deflated. Those that worked within the hospitals’ wall seemed like selective personnel who knew exactly what they were dealing with. One of the Beasts’ keepers seemed very up to speed on how to use the flashes of light to protect himself. In another scene, he was well versed with just how fragile Mr. Glass is. Therefore, I found it laughable that two prisoners all but walked out of the facility in their bid for freedom. Even under the guise of Miss Patricia, Kevin Crumb’s external facade would have and should have been noticed way before they got as far as they did.

Overall, I loved this film though. I didn’t find too much to complain about. After watching it, I found myself reflecting on many of the characters and storylines. It’s a film that stays with you and I didn’t feel like moving onto a new story straight after. In fact, I wanted to review the series as a whole.

I think about the characters from time to time and how they’ve evolved between the movies and I didn’t find it contrived. It’s creative and different and you’ve got to be appreciative of that.

4 it’s not contrived, it’s brilliant out of 5

Is the Glass Movie Trilogy on Netflix?

The second film, Split is available on Netflix and Glass is scheduled to be as well. So far though, Glass is only available to stream, rent or buy. Amazon is a great place to start.

James McAvoy, The Best of the Glass Trilogy

I’ve said it before and, I’ll say it again. Give this man an Emmy. As a side note, I was disappointed that much of The Beast’s gore-filled actions were completed off-screen. McAvoy is like a chameleon within this role and, I find it insane that it’s only fans of the franchise that blow his trumpet.

The main identities in the Glass film are Kevin, Miss Patricia, Hedwig, and, Dennis. But we also get to meet a few others. Some are certainly attributed to certain names from the computer list, but others appear so briefly it’s hard to pin down exactly who is who. Here’s what we do know though:

Dr. Ellie and her people

The following are the remaining names, someone here is Spanish and another is a man who yells out to Dr. Ellie Staple before disappearing into another identity.

It’s important to understand The Beast’s agenda. Why does he do what he does? What’s his ultimate goal? In a nutshell, he wants to rid the world of unbroken people. People who have never had a traumatic event in their lives are considered worthy of annihilation. For example, Casey was spared due to her history of sexual abuse from an uncle. Casey was considered ‘broken.’

The Beast: Why are you in this chair, child?
Elijah Price: My bones break easily. I was born this way. I’ve had ninety-four breaks in my life. I’ve known only pain.
The Beast: Rejoice. You have suffered and are now pure.
Elijah Price: I assume you were sent here to be an avenging angel. How much do you want to avenge us?
[The Beast yells loudly]
Elijah Price: Well, that sounds like the bad guys teaming up.

Quote from Glass movie between The Beast and Elijah Price

A short explanation of exactly who Dr. Ellis is and what her organization stands for is summed up in this quote from her.

“They got it wrong in the comics. They talk about secret evil groups trying to stop the heroes. I don’t think we are particularly evil, and we don’t choose sides. We try to stop both of you. If there is one of you, the opposite of you appears. It escalates. We step in. There just can’t be gods amongst us. It’s not fair. It has worked just fine for ten thousand years our way.”