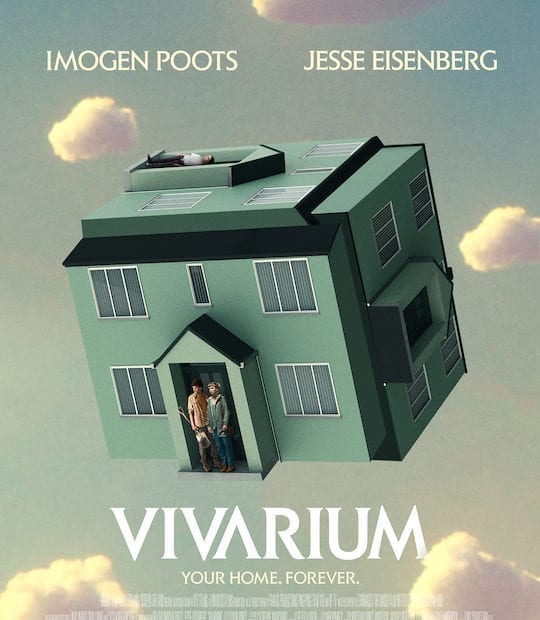 I love Jesse Eisenberg and his movies. Vivarium boasts a science-fiction mystery label and goes for broke with weirdness. The fact that Imogen Poots also stars in this crazy tale about two people stuck in a house is just gravy. I mean how’s the timing? Release a quasi-horror movie in the middle of a pandemic where people all over the world are literally trapped inside their own homes about people trapped inside their forever home.

Like most movies, I didn’t watch the trailer but I did like the sound of what pointed towards this being tightly constructed like a Twilight Zone episode. Two people getting trapped in a weird green neighborhood is a story I can get on board with. Fitting somewhere between The Truman Show and Martys, Vivarium aims to highlight humanity’s mundane existence.

The narrative begins by giving us a brief introduction to Gemma (Poots) and Tom (Eisenberg.) Both the introduction imagery while the credits roll and the first scene involves a bird. A baby bird to be precise, one that grows but eventually falls from its nest. Its death is presumed to be the result of a predator. Gemma finishes her day working as a teacher and Tom, a gardener, meets her before they set off to begin their search for a home they can enjoy together.

Martin, the sales agent is the type of character that induces immediate suspicion. He talks in an odd generic fashion and is too tidy. They drive into the estate and are confronted by all-green suburban houses. These identical homes sit row upon row, one after the other in eerie sameness. Martin shows them inside and offers more undetailed information about the living situation, scant of any real detail. A living room to live in, the home itself ideal, the perfect environment for a young family. More weirdness from Martin prior to his sudden disappearance and Tom and Gemma briskly find their car to leave. The Vivarium movie doesn’t waste any time before Gemma and Tom begin to realize they can’t find their way out of Yonder.

A steady echo chime plays between low bass throbs. If you haven’t already googled the meaning of Vivarium, here’s a brief summary; A vivarium is used to keep pets or something similar to look at. They are generally made to look like the original habitat.

After some frantic and bizarre exploration, the pace slows down. Life for Gemma and Tom has also slowed. They are charged with a baby that appears in the misty morning alongside the promise of freedom. The baby is unlike any baby they have encountered before and both refuse and buckle against its incessant needs. Neither is under the delusion the baby is human and its growth rate is constantly compared with that of a dog.

Like anyone trapped in any type of cage, resignation sets in. Appreciation is found in the smallest of things, like discovering the car battery still works and music can be played. Before long, you’re left to wonder what the aim of the experiment might be. Is it an exercise in socialization, a simple surrogacy or could it be something more? The narrative flicks though a few scenarios before Gemma and Tom both seek different things in the face of banal chaos.

Performances in Vivarium are perfectly attuned. Sean Jennings (as the boy) fits harmoniously amongst his well seasoned and established co-stars. The movie 97-minute runtime feels a touch long for a film that is often on repeat. It suffers under the pressure of being existential in its message but dumbing it down to being about where home truly is.

Overall, this science fiction movie touches on enough areas between life and death and otherworldliness to scratch that ‘weird movie’ itch.

4 Jesse Eisenberg mystery movies out of 5