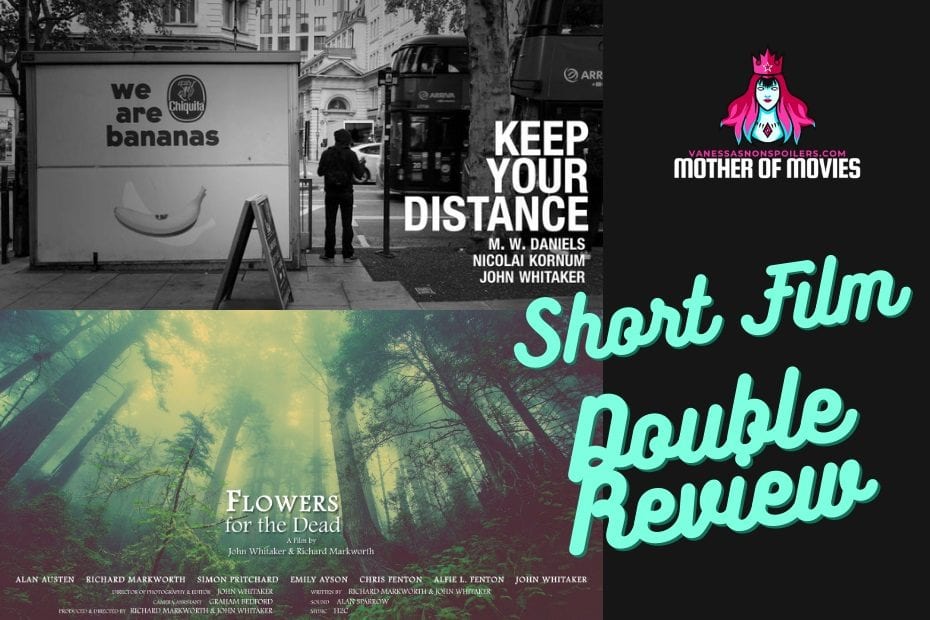 The Isolation Horrors is an anthology film Mother of Movies covered in early May 2020. Now Nicolai, MW Daniels & John Whitaker got together and made a nifty piece called KEEP YOUR DISTANCE. The artistic cinematography of the short is excellent. But what’s more, is Keep Your Distance could very well be an official anthem short film for COVID-19. Secondly, Richard Markworth joined Whitaker for another low-budget slice of goodness with FLOWERS FOR THE DEAD. Let me take you through both of them. Best of all, you can watch them both right here below care of YouTube.

The movie was shot on an iPhone in London by the talented Nicolau Kornum who also came up with the idea. Kornum edited and directed Keep Your Distance, as well. Both feature music from one of the creators, John Whitaker from 1i2c whose discography is available on Bandcamp.

Keep Your Distance is shot in black and white and follows a man reading a newspaper that includes the rules around successful measures to keep yourself and everyone you know protected from COVID-19. Wearing a black hoodie and more importantly a mask, this guy for all intents and purposes is doing the right thing.

Before long another man stands directly behind him, certainly not 6 feet away and certainly not wearing a mask. He coughs, albeit into his elbow, but also sans mask before casually walking away.

Should You Wear a Mask

Whatever your ‘stance’ on mask-wearing is, Keep Your Distance will give you a reason to pause. Perhaps that pause will only be for the 3-minutes it takes to watch this short film. There is so much debate from those that choose to ignore a fairly simple measure. Is it really worth the conscious effort to go against the grain when this one thing lessens the chance of spreading a disease that has literally upended the world as we know it?

Keep Your Distance movie is short, but the message it sends encapsulating the frustration for the rest of us is strong.

Flowers for the Dead

Flowers for the dead commences with an excellent high-energy track as a young woman runs through a forest. The camera slowly pans up to a sign with a photo of the same girl, “missing.” We are then introduced to two guys, Peter, and George discussing their next big break. The woods where she was last seen just happens to be renowned as being the most haunted woods locals have ever heard of.

With supernatural stories being something everyone wants to see, these two fast-talking lads plan to monetize this missing girl’s story. Alongside the notorious Abbotswood curse, Peter plans on making this investigation his next lucrative social media-fueled extravaganza. As they talk about all the things they’ll be able to buy and the women they will attract once famous, the disappearance of Holly is slowly eked out. Overlays of footage of the woman’s final moments begin to unfold.

Little do they know there really is something menacing in the woods. As they set up to film deep within the heart of the forest, they have been seen. But is it the ghost of Holly or something much worse?

Flowers for the Dead runs for just over 26-minutes. Watch it below and leave a comment and a like on the video. Help support these indie filmmakers.