Straight Edge Kegger Review, Does A Horror Movie Need To Represent The Lifestyle? 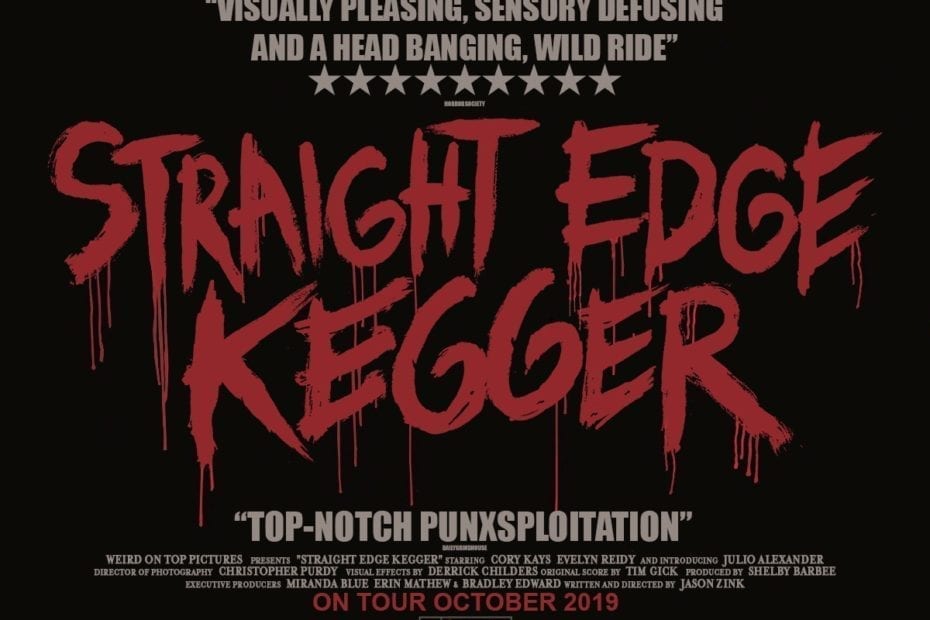 Straight Edge Kegger is a low budget independent horror movie. Its creator is writer-director Jason Zink. Together with his partner Shelby Barbee they own the production house, Weird on Top Pictures. The film about an extreme straight edge group run by a cult-like leader, James. This punk rock music fueled movie will be dropping onto the Shudder platform at a yet to be announced date. What I want to know is why some reviewers are upset and citing there is a misrepresentation of the straight-edge lifestyle. It’s a horror movie after all.

Mother of Movies likes realism, sure, but I also like engaging characters and a well-written story. If a horror movie then also combines excellent performances into its creative recipe, it’s like gravy on a well-executed chunk of movie-meat. In horror movies particularly, I’m not as convinced the lifestyle of the typecast needs to be geared towards representing their grassroots. If you want realism, there are plenty of documentaries to watch.

What Is Straight Edge Lifestyle?

The story takes a simple stance, briefly explaining through Brad a little about what a straight edge lifestyle means to him. It does take the time to announce that for Brad, it was about being part of a group that created a safe space for people. Combining this concept with a militant group who just has to take their beliefs too far and you have the solid premise for a slasher movie of this type. Kegger also makes sure that the message it’s sending is that;

“People should be allowed to live their lives the way they want to.”

As for the film, if you enjoy a hectic punk rock music score and some rampant violence, there is plenty on offer. Like many slasher movies before it, James’ order that he and his masked group follow Brad to a party and then proceed to take out everyone inside is not based on more than a mere slight from Brad. The first half plods along like a Sunday driver. The dialogue is on the lofty side and some of it feels like being thumped over the head with good intentions, but all that is forgotten once the carnage starts.

The transition between the before and after is poorly executed. One minute Brad is anti-anything involving alcohol. Suddenly after picking up the wrong glass containing vodka and orange juice he’s catapulted into a night of shots and drunken shenanigans. With so much time spent setting Brad’s character up, his change of heart came as a little jarring. Performances from Cory Kays and Julio Alexander who play Brad and James respectively are solid and engaging. James may not represent a straight-edge lifestyle with the realism required of those within the subculture, but he plays a good villain. Alongside the masks and the extreme behavior to punish those they deem worthy, the whole thing feels like a punk version of The Strangers.

The cinematography is utilized well and the set aesthetics are really great. Effects are markedly great for a low budget affair. Most of the onscreen violence is surprisingly pulled away at the last minute. Those looking for gratuitous kills en masse might be disappointed. What we do see though, is creative and quite gruesome.

With attention to the film as a whole, was I a massive fan of Straight Edge Kegger? Sadly no, but slasher fans will get a dose of a few things they like. Especially if you like punk rock music in your movies.

I give Straight Edge Kegger