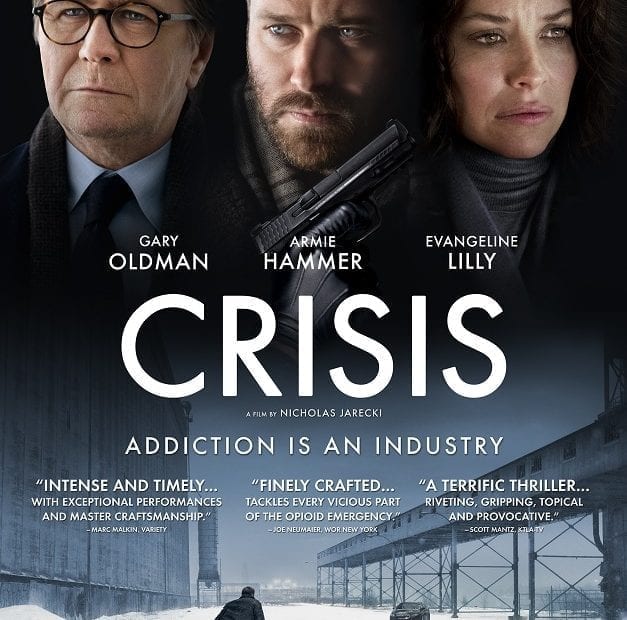 I must admit, I read a few reviews for Crisis prior to settling into my own thoughts on the new drama by writer-director Nicholas Jarecki. I was surprised that top critics on Rotten Tomatoes and other publications were not enthusiastic about the crime thriller. In fact, many hated this film with more passion than Armie Hammer has for cannibalistic sex fetish. Alongside what could definitely be one of Hammer’s last roles on screen is Gary Oldman and Evangeline Lilly.

The story follows the three individuals, Hammer as Federal agent Jake trying to take down a heavy-handed drug smuggler. Secondly, Evangeline plays Claire, a mom and former addict who discovers her son is dead. And thirdly, Oldman as Dr. Bower, a scientist who finds a new (fictitious) drug about to be let loose on the market may not be as stable as they say. Each end up twisted into one larger piece of the story all linked by opioids.

I will agree with the critics on one level. The film overall is not hard-hitting or pious. There is not a lot about the three storylines that predicate hope or solutions. Nor does it try to say all of our systems work the way they should. And why should it? Crisis settles into the very nature of the opioid epidemic being less about single entities rising up against large billion-dollar corporations. For Mother of Movies, some of the scenes in Crisis felt more honest than many similar movies I’ve seen where one person wins triumphantly over the big guys. That scenario might happen in films like The Pelican Brief, but what percentage of these whistle blowers are newsworthy? How many, instead are simply left picking up the pieces of their virtue?

What I liked about Crisis was the fact it didn’t try so hard. The story is almost like a narrative of fence-sitting about these serious issues. But the lives of the people in Crisis are still interesting enough to float the film. I found the casting a nice combination of angst and flatline emotions I would expect of a setting like this. More often than not, drug epidemics play a part in many people’s lives. Fictional or not, the point of a lab test for a pharmaceutical drug turning up a less-than-ideal result would more likely be brushed away for ‘the greater good.’ Wouldn’t it be more commonplace for big pharma to win?

As for Claire, suspension of belief needs to be accounted for. The cops kinda sorta dropped the ball on this one. However, where Claire is concerned, she was less of a gun-toting criminal investigator than I’ve seen characters turn into in many other crime-dramas. What’s more, Federal agent Jake was onto her early on which is more than I can say for some films of this ilk who have pedestrians walking into forensics like they were born there.

I wasn’t as happy with a skeletal sexual harassment accusation plot point forcing a large group of scholars to be so easily used on Dr. Bowers’s employment. Nor was I happy about Indira Varma‘s role as his wife being criminally underused. Quite frankly Varma is brilliant and deserved more than a few pans from the camera across the back of her head as she mumbled supportive dialogue.

But overall, Crisis was an enjoyable watch for me. The run-time is quite long, almost 2 hours, but I managed to stay up way past my bedtime to finish it. ‘Crisis’ was a little predictable but never boring.

3.5 an invisible epidemic is still an epidemic out of 5

Crisis 2021 was acquired as a screener for review purposes. Watch the movie from March 6th on VOD and digital.