Home » Image » Trauma Center Review, Thanks I Hate It

Trauma Center Review, Thanks I Hate It 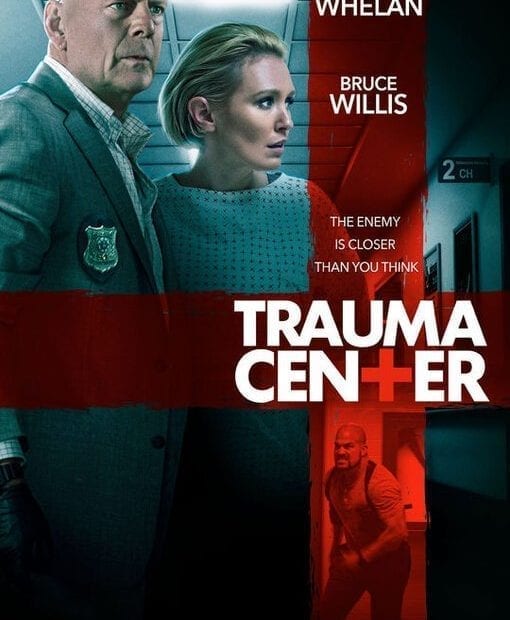 I like Bruce Willis. Obviously, I’ve never met the guy to know personally whether he’s likable or not, but as an actor, he’s standing the test of time. Trauma Center is not a good movie and Bruce Willis is not good in the film. Willis should be pulling this train wreck but somehow he just slowed it down.

I’ve seen the film described as a ‘small scale’ Die Hard, I disagree, wholeheartedly. If you flick through the user reviews on IMDb you’ll see it. But I won’t name and shame here.

The plot for Trauma Center is a well-worn track. Baddies leave some evidence in (yes I said in) a witness and now they must find that person and fix the error. Here the error comes in the shape of Madison played by Nicky Whelan. She’s been left with a bullet in her leg and the villains want it.

The movie itself doesn’t get off to a good start. Willis plays good cop detective Wakes. He has a conversation with another good cop detective Martin (Tyler John Olson.) They park the car they are in and get out only to resume their chat from opposite sides of the vehicle. Across the roof of the car. I raised a quizzical eyebrow as the camera focusses on each of them when they take turns to speak. I hate this technique, it annoys me. It turns a good conversation into an impersonal weird one. Willis is talking quite loudly as if he’s much farther away than he is. I instantly wondered whether both these actors were present at the same time for this scene. It’s weird and I don’t like it.

Later Wakes realizes he’s been given the runaround during the investigation he and Det. Martin is on. He shouts into an unanswered phonecall to Tony “It’s a setup!” Bruce doesn’t sound panicked enough and he’s still talking way too loud.

The Runtime for Trauma Centre is 87 Minutes

Trauma Center only runs for 87 minutes and it plays out like a midday-made-for-television movie. The narrative is wafer-thin and still manages to pepper holes into the plot like the bullets that get sprayed around from time to time. So many questions, so many unanswered questions. With so little going on, it’s easy to pick at the tiniest things.

Madison is in the wrong place at the wrong time. This line is usually good for films. Especially one with a Die Hard star attached to it. All I could think was that the cafe where Marion works must have been especially quiet that day. I even wondered if perhaps the garbage bins she was ducking out to utilize were not the normal distance away. Madison ends up in the middle of a shoot out. No one else sees, there is literally just the good guy and the baddies and poor Madison. By the time Wakes arrives on the scene, she’s passed out and he personally takes her into the trauma center.

Wrong Place at the Wrong Time

Wakes is put in charge of protecting the only witness to a very out in the open murder seen by no one else. Of course, Wakes is onto the baddies, but he doesn’t know who they are. He comes up with a plan, and somehow wrangles closing a whole ward to hide her. Less of a Trauma Center and more of a game of hide-and-seek.

But why does Madison need to be hidden in the first place? A great question, and that’s simply because the rest of the hospital is a little too busy to take bullets out of people’s legs right now. Don’t worry though the surgery is scheduled for the next day. She just has to make it through the night alone with one cop minding her.

As a special treat, once the bad guys are finally in the spotlight they put their own special spin on confidential information recovery. Doctors and nurses in this movie will give information to anyone in a uniform it seems. Between the snail’s pace cat and mouse sequences, and escape measures involving electrocution I couldn’t garner one iota of enthusiasm for this film. I mean, there is even a scene where for some reason the hospital corridors are misty… and I don’t know why.

Even Willis himself was not on board, he seemed to be as tired of the film by the end as I was.

I give Trauma Centre

Directed by Matt Eskandari and Written by Paul Da Silva