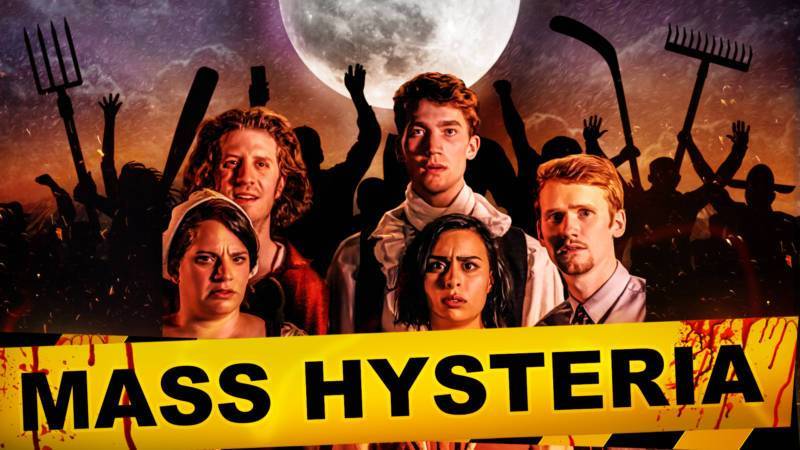 17th-century witch trials are the subject of many books, films, and documentaries. Mass Hysteria is a low budget film that premiered at the Independent Film Festival Boston to a sold-out audience in 2019. It also screened at the Women in Horror Film Festival 2020. Mass Hysteria is a movie for those who love nothing more than the combination of humor and horror. It begins with a group of actors recreating the Witches of Salem in a play and around the town. Now it has a release date and can be watched from October 1st, 2020 to VOD but can be pre-ordered here: Vimeo: https://vimeo.com/ondemand/masshysteria2020.

The film itself was produced in Massachusetts, Salem over 25-nights. Mass Hysteria certainly pays tribute to the sentiment of the 1692 trials and brings the dark and sinister era into a modern tale.

Sooner or later, Mass Hysteria will catch up with you

How Were the Witches of Salem Executed?

Back in the day, scores of people were either hanged or burned.

In an ironic take on the formidable force of paranoia mixed with chaos and confusion, the story unleashes the idea of mass hysteria onto a group of tourists. The same tourists that came along for a glimpse of the supernatural get more than they bargained for. Salem is a popular sightseeing destination, and just like the real city, onlookers are treated to performances everywhere they go. Most poke fun, laugh, and generally don’t take any of the town’s history seriously. Of course, true to the echo of past events, one small coincidence leads to the untimely death of a voyeur in the audience. During an intense scene, Tina points to a man as she recites her lines, cursing him. He dies. It’s here the missive of the well-established rules of a witch hunt begins.

Where Were the Witches of Salem Killed?

As a reward for history buffs, famous recognizable landmarks are featured throughout the story. Old Town Hall, Derby Square, Pioneer Village, The Witch Memorial and, Essex Street were all used as backdrops for this tight 66-minute lesson. Those with a keen eye for superstitions will get a kick out the myriad of easter eggs throwing caution to the tempting winds of fate.

Also, there is an endless supply of dry and dark gags. Mass Hysteria aims the laughs at both high brow and extremely low brow tastes. Performances from such a large cast are remarkably great. Central characters are not treated as superficial props and instead, have finely tuned layers to unravel. Cinematography is a well-balanced combination that does more than enough to highlight the quality of the production. It’s especially notable to mention the movie was made entirely at night. No mean feat for any filmmaker, I’m sure.

Summing up, Mass Hysteria is a great way to pass the time. Especially if all of the ingredients sound good to you. For me, there weren’t too many laugh-out-loud moments. What I liked was that it felt like a slasher film mixed with a virus outbreak mixed with a witch hunt.

I give Mass Hysteria

3 big old witchy witches out of 5

And also, not just for Halloween, these witches legs from Amazon are for all year round